Lasers on the basis of Yb doped crystals or fibres have gained increasing importance over the recent years. High power cw lasers were developed on the basis of Yb:YAG as well as with Yb doped fibres. Yb:YAG and Yb:KGW lasers can also be operated as high power ns, ps or fs lasers.

Lasers with extremely high output power (e.g. > 10kW cw) are often based on Yb:YAG. LAYERTEC has developed different coating designs for handling extraordinary high fluences. The designs are optimized either for cw-radiation or ns-pulses or ps-pulses.

Steep edge of a long wavelength pass filter can also be combined with a defined partial reflectance in the wavelength range of the laser radiation. 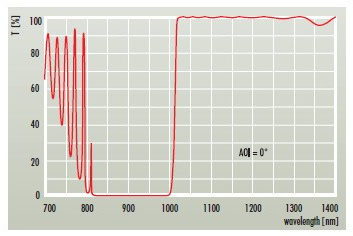 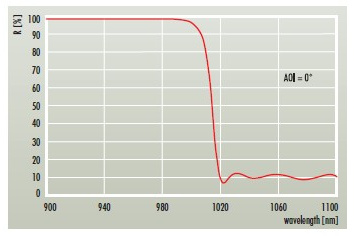 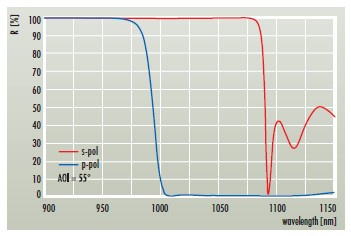 Thin film polarizers are key elements for regenerative amplifiers in ns- and ps-lasers.

Picosecond Lasers on the basis of Yb Doped Materials

Picosecond lasers, i.e. lasers with pulse lengths of some hundred fs to 10ps can be built on the basis of Yb:YAG-, Yb:KGW- and Yb:KYW. These lasers enable materials processing without unwanted thermal effects such as melting, which results in unprecedented accuracy of the processes. Moreover, picosecond lasers don't require chirped pulse amplification which reduces the costs compared to fs-lasers and the laser crystals don't show thermal lenses which enables high output power. Recently, it was demonstrated that lasers with an average power of 400W (770fs, 1MHz) are possible on the basis of Yb:YAG slab crystals.

For GTI mirrors which are often used for pulse compression from the ps range down to a few hundred fs please see GTI femtosecond lasers.