Coatings for femtosecond laser optics are usually optimized for special reflectance, transmittance and GDD spectra. The laser induced damage threshold (LIDT) of such coatings is less important for the majority of the applications. Nevertheless, high power fs laser are under investigation and the output power of fs lasers has increased enormously over the recent years (see. Ref.1) and the references therein). Thus, the LIDT of fs laser optics becomes more and more important. LAYERTEC has carried out detailed investigations of the LIDT of optics for fs and ps lasers.* As shown in the table below we found large differences in the LIDT values of standard, broadband and ultrabroadband optics and our high power mirrors. Standard low GDD mirrors show a LIDT value of 0.3J/cm2 while negative GDD mirrors, broadband and ultrabroadband components have an LIDT of about 0.1J/cm2.

Our investigations proved that the LIDT of femtosecond laser optics depends on the coating materials and on the coating designs. The difference in the LIDT values of standard low GDD components and the other optics mentioned above results from the different coating designs used. Especially the broadband and negative GDD designs result in low damage thresholds. Only the designs for standard low GDD components reached higher LIDT values. In all of these cases materials with a high contrast of the refractive indices were chosen in order to achieve large bandwidths. Higher LIDT values can be achieved using other coating materials. However, mirrors made of these materials have only a bandwidth of about 80nm because of the lower contrast of the refractive indices. Nevertheless, this bandwidth is enough for pulse lengths as low as 150fs. All high power designs are optimized for GDD<20fs2.

We distinguish the different high power designs because of different material combinations and designs which need different efforts with respect to the preparation of the coatings and which differ also with respect to the mechanical properties, e.g. the stress in the layers. The spectral bandwidth of these coatings is nearly the same. An example is shown in figure 1.

It was also found that LAYERTECs optimized silver mirrors have LIDT values which are higher than that of standard components in the fs range. Silver mirrors are advantageous because of their extremely broad zero GDD reflectance band with a reflectivity of up to 98.5% at normal incidence. Even silver mirrors with a defined transmission of 0.01% show higher damage thresholds than all dielectric ultra broadband components. For more information on silver mirrors see silver mirrors. 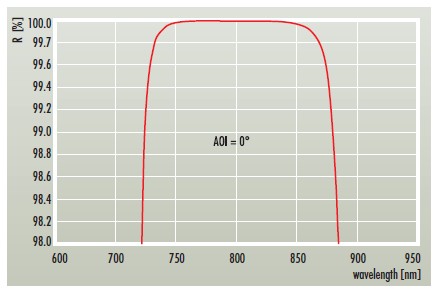 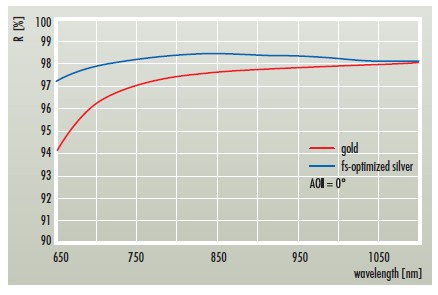 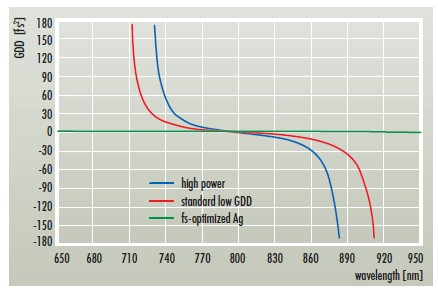