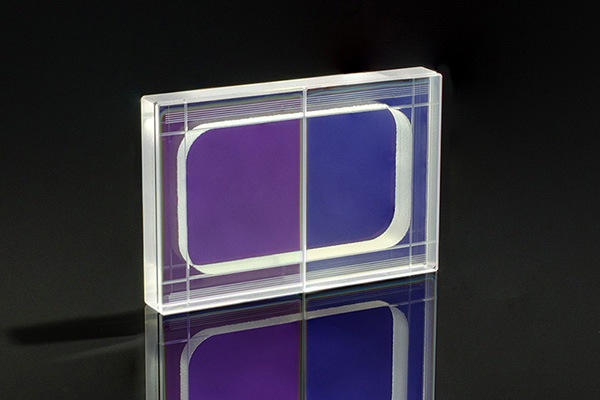 Beam splitters, separators and combiners are identical components that are arranged in the beam path depending on the application. Basically, they are used to split or combine the light of the laser beam.

In the beam splitter, the monochromatic laser beam falls at 45°. A defined part of the laser beam is reflected, while the other part is transmitted.

Schematic drawing of a beam splitter, separator and combiner

If two lasers of different wavelengths are to be separated from each other, the component is placed in the beam path so that both laser beams are incident at 45°. Laser beam 1 is reflected, laser beam 2 is transmitted - the component acts as a separator.

If the separator is rotated by 180°, two laser beams of different wavelengths can be bundled.

In addition to standardized, stocked separators, we primarily develop and produce unusual beam splitters, which are created, for example, by joining structured individual components. Our specialty here is the production of separators with high destruction thresholds.