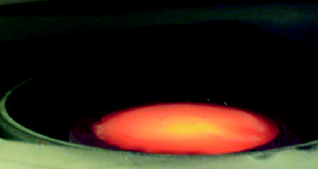 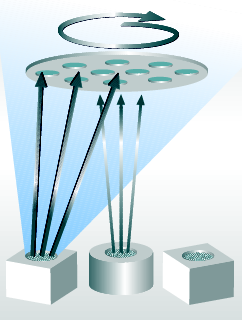 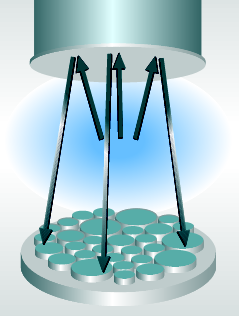 Schematic magnetron sputtering process: Ions from the gas discharge are accelerated to the target (top) where they create coating particles. 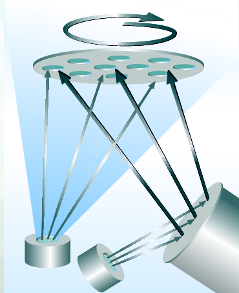 Ion beam sputtering: Ions from the deposition source (middle) are accelerated to the target (right). Sputtered particles condense on the substrates (top). A second ion source (left) assists the process.
Optical coatings are widely used to change the reflectivity of glass surfaces, reaching from spectacles to high power laser applications. This page will give you an overview about three major coating technologies regularly utilized at LAYERTEC.

The subcategories introduce the physics behind dielectric an metallic coatings as well as the possibility to combine metallic and dielectric layers.

Thermal and electron beam evaporation are the most common techniques for the production of optical coatings. LAYERTEC uses these techniques mainly for UV coatings. The evaporation sources are mounted on the bottom of the evaporation chamber. They contain the coating material which is heated by an electron gun (e-beam evaporation) or by resistive heating (thermal evaporation). The method of heating depends on the material properties (e.g. the melting point) and the optical specifications.

The energy of the film forming particles is very low (∼1eV). That´s why, the mobility of the particles must be enhanced by heating the substrates. Nevertheless, the packing density of evaporated coatings is relatively low and the layers often contain microcrystallites. This results in relatively high straylight losses (some tenth of a percent to some percent, depending on the wavelength).

Moreover, water from the atmosphere can diffuse into the coatings and out of the coatings depending on temperature and humidity. This results in a shift of the reflectance bands by ∼1.5% of the wavelength. Nevertheless, evaporated coatings have high laser damage thresholds and are widely used in lasers and other optical devices.

In general, the term “sputtering” stands for the extraction of particles (atoms, ions or molecules) from a solid by ion bombardment. Ions are accelerated towards a target and collide with the target atoms. The original ions as well as recoiled particles move through the material, collide with other atoms a.s.o. Most of the ions and recoiled atoms remain within the material, but a certain fraction of the recoiled atoms is scattered towards the surface by this multiple collision process. These particles leave the target and may then move to the substrates and form the film.

The above mentioned ions are delivered by a gas discharge which burns in front of the target. It may be excited either by a direct voltage (DC-sputtering) or by an alternating voltage (RF-sputtering). In the case of DC-sputtering the target is a disk of a high purity metal (e.g. titanium). For RF-sputtering also dielectric compounds (e.g. titanium dioxide) can be used as targets. Adding a reactive gas to the gas discharge (e.g. oxygen) results in the formation of the corresponding compounds (e.g. oxides).

LAYERTEC has developed magnetron sputtering for optical coatings from a laboratory technique to a very efficient industrial process which yields coatings with outstanding properties especially in the VIS and NIR spectral range. Our largest magnetron sputtering plant can coat substrates up to a diameter of 500mm.

This technique uses a separate ion source to generate the ions. To avoid contaminations, RF-sources are used in modern IBS plants. The reactive gas (oxygen) is in most cases also provided by an ion source. This results in a better reactivity of the particles and in more compact layers.

No external heating is necessary to produce oxide layers with minimum absorbance.