The purpose of optical coatings is to change the reflectivity of optical surfaces. According to the materials and physical phenomena which are used one can in principle distinguish metallic and dielectric coatings. Metallic coatings are used for reflectors and neutral density filters. The reflectivity which can be achieved is given by the properties of the metal. Some of the most common metals for optical applications are described in our catalog.

For a more detailed explanation of the physics of optical interference coatings, we refer to our catalog starting on page 26 and the literature listed on page 32.

The reflectivity of the interface between two media depends on the refractive indices of the media, the angle of incidence and the polarization of the light. In general, it is described by the Fresnel equations.

The phase difference between the beams (c) and (d) is given by the optical thickness n·t of the layer (the product of the refractive index n and the geometrical thickness t). Moreover, one must take into account that a phase jump of π, i.e. one half wave, occurs if light coming from a low index medium is reflected at the interface to a high index medium.

Figure 2:  Schematic reflectivity spectrum of a single wavelength AR coating (“V-coating”) (a) and of a broadband AR coating (b)

A single low index layer can be used as a simple AR coating. The most common material for this purpose is magnesium fluoride with a refractive index n=1.38 in the VIS an NIR. This material reduces the reflectivity per surface to R∼1.8% for fused silica and to nearly zero for sapphire.

Single wavelength AR coatings consisting of 2–3 layers can be designed for all substrate materials to reduce the reflectivity for the given wavelength to nearly zero. These coatings are especially used in laser physics. AR coatings for several wavelengths or for broad wavelength ranges are also possible and consist of 4–10 layers.

Figure 3:  Schematic drawing of a quarterwave stack consisting of layers with equal optical thickness of a high index material (grey shading) and a low index material (no shading) (after [1]) (a), reflectivity spectra of quarterwave stacks consisting of 15 pairs of Ta2O5/SiO2 and TiO2/SiO2 (b)
[1] P.W. Baumeister “Optical coating technology”, SPIE press monograph, PM 137, Washington 2004

To visualize the effect of different refractive index ratios figure 3b compares the reflectivity spectra of quarterwave stacks consisting of 15 pairs of Ta2O5/SiO2 and TiO2/SiO2 for 800nm (n1/n2=2.1/1.46 and 2.35/1.46, respectively). 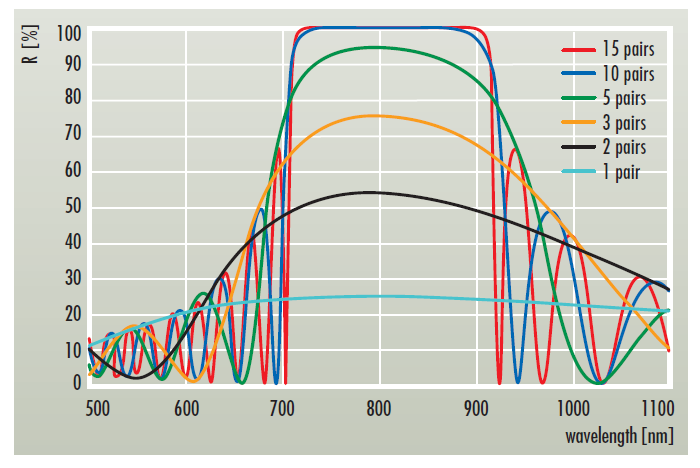 Figure 4 also shows that an increasing number of layer pairs results in steeper edges of the reflectivity band. This is especially important for edge filters, i.e. mirrors with smoothed side bands. Extremely steep edges require a large number of layer pairs which in turn results also in a very high reflectivity. Extremely high reflectivity values require very low optical losses. This can be achieved by using sputtering techniques.